Rating: B+/  In this drama based on Dennis Lehane’s short story Animal Rescue, Tom Hardy plays Bob, a quiet guy with a dark past who works as a bartender and tries to stay out of trouble. In the process of avoiding the temptations of a life of crime, he meets a girl (Noomi Rapace) with her share of bugs in her attic and reluctantly adopts an abused pit bull puppy. But when the girl’s boyfriend (Matthias Schoenaerts) starts pushing Bob to his limit and some mob money gets stolen from Bob’s boss’ (James Gandolfini)’s bar, Bob reveals his capacity for animalistic savagery that lingers behind his mild exterior.

I spent this whole movie afraid that the pit bull puppy Rocco, which was literally the cutest little dog ever, was going to die a brutal and untimely death. It doesn’t bode well for Rocco when he is introduced beaten and bloody in a garbage can, but the ending may surprise you. Anyway, the film is mostly about the development of Tom Hardy’s character, and how the quietest, most mild-mannered people can sometimes be the most dangerous.

We see Bob’s tenderness towards Rocco and willingness to buy free drinks for people in his boss’ bar juxtaposed with him wrapping up a severed arm ‘like a piece of meat,’ killing a man (albeit not a very nice man) without blinking an eye, and revealing a shocking secret with a startling, almost off-hand coldness. By the end of the movie, we are not sure what to think of Bob or by extension, the film itself. Tom Hardy is very good here; while his expression rarely changes his eyes tell you what you need to know and even though Bob is not the nicest man alive, his climactic monologue gives you and idea of the guilt he lives with every day of his life.

One problem I had with the movie was the way the threat of violence hangs over the girl, Nadia, and the dog’s heads in an almost cartoonish way. Yes, we get that Nadia’s boyfriend is a bad guy. But Nadia seems almost objectified as a parcel Bob has to protect from the big bad boyfriend. And they hammered the ‘animal in danger’ card a little too much for my liking.

Overall, though, The Drop was a good, Noir-ish morality tale featuring talented actors (including James Gandolfini in his last movie role before his premature death) and a refreshing sense of unpredictability that separates it from the same-old same-old hard-boiled crime stories. There’s a palpable sense of moral ambiguity as we wonder to what extent we should empathize with Bob and to what extent would our choices resemble his were we in his shoes. The dialogue has a kind of a natural quality and the story moves at a quiet pace with plenty of room for character development and startling moments of sadistic violence thrown in for good measure.

The Drop isn’t an unforgettable movie, but it’s definitely one that I’d be willing to watch again. There’s an old adage that goes, ‘it’s always the quiet ones,’ and this definitely applies to Tom Hardy’s Bob. The Drop exists in a movie world of poverty and barely contained menace where second chances are hard to come by and bad behavior doesn’t always end in just desserts.  Praise is in order for Tom Hardy’s performance, even if by the end you’ll probably be empathizing with the puppy more than anyone else in this dark, unscrupulous little story. 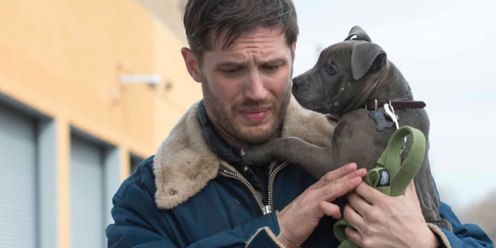