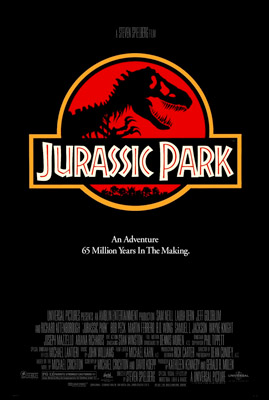 Rating: A-/ Jurassic Park is an unmitigated delight , a big, riotous, cheesy blockbuster that nonetheless has an element of believability that Jurassic World lacked . Among all the creature-feature action and dinosaur carnage is a surprisingly careful attention to characters and relationships which along with the for-it’s-time astonishing special effects makes the film a bona fide crowdpleaser.The dinosaurs are, of course, the main attraction, but the characters are also well-developed for this kind of movie, and as far as films about dinosaurs in modern settings go Jurassic Park is only about 1/10 as stupid as you might expect.

Paleontologists Dr. Alan Grant (Sam Neill) and Dr. Elle Sattler (Laura Dern) are interrupted during a dinosaur dig by eccentric billionaire John Hammond (Richard Attenborough,) who wants them to endorse his ‘real live biological attraction,’ bought and paid for by him and set aside on a secluded Caribbean island. What Grant and Sattler don’t know is that the ‘attraction,’ treated by the childlike Hammond like the amusement park to end all amusement parks, actually contains real dinosaurs, cloned from strands of DNA extracted from prehistoric mosquitoes trapped in amber. Tourists, T-Rexes, Velociraptors- what could go wrong? Of course, the ever-hopeful Hammond is blind to the obvious setbacks of the park (i.e. a worker just got gored by a raptor and his family is suing for bookoo bucks) as he naively sees his creation only the way he wants to see it and won’t listen to reason.

Alan is resolutely child-phobic, so he’s obviously less than pleased when John Hammond’s precocious kids Tim and Lexi (Joseph Mazzello and Ariana Richards) show up and opt to follow him everywhere he goes. On their tour of the Jurassic Park, the group is joined by a quirky Chaotician (Jeff Goldblum) and a greedy lawyer (Martin Ferraro) who are there to check out the park for breaches in safety. But thanks to a dissatisfied employee named Nedry (Wayne Knight)’s meddling, the dinosaurs are released and free to feast on the flesh of the heroes. Against his better judgement, Grant is thrust into a father figure role as he protects the two kids from bone-crunching carnivores, and Hammond must look on as his fondest dream becomes his worst nightmare.

Jurassic Park was a huge hit among filmgoers and spawned several sequels, but this one is generally considered the best of the lot. The characters are lovable and Spielberg makes excellent use of hair-trigger tension and a relatively liberal scattering of special effects,a t least compared to modern blockbuster films. It is actually thoughtful and it’s concepts are actually based on scientific concepts  (albeit concepts that wouldn’t work in actuality.) It’s just a lot of fun and perfectly paced, combining character development and action in a way that doesn’t skimp on the characters but also moves briskly and excitingly to it’s conclusion. Also, the human villain’s motive actually makes sense, unlike in Jurassic World with Vincent D’Onofrio trying to militarize raptors (rolls eyes.) Greed is always a huge motive, sadly, and Nedry has enough of it; it’s just unfortunate that Nedry’s greed gets people killed.

Funny story; when this film had just been released (before I was born) my dad went to see it with family and when the scuzzy lawyer got devoured by a Tyrannosaur on the john, my Aunt screamed at the top of her lungs, “Nnnnooooo!” Apparently she thought is was going to be some kind of cute movie with baby dinosaurs and she didn’t actually expect anyone to get snacked on, and the character’s demise was so shocking for her she cried out in the middle of the theater, embarrassing my dad profusely in the process. Worst surprise since my other aunt, who hates movie violence, was taken to see Watchmen by her nephew. I wonder if I can trick one of them into watching The Human Centipede? 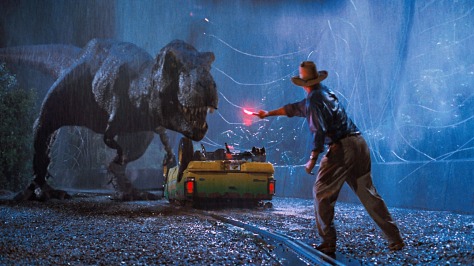