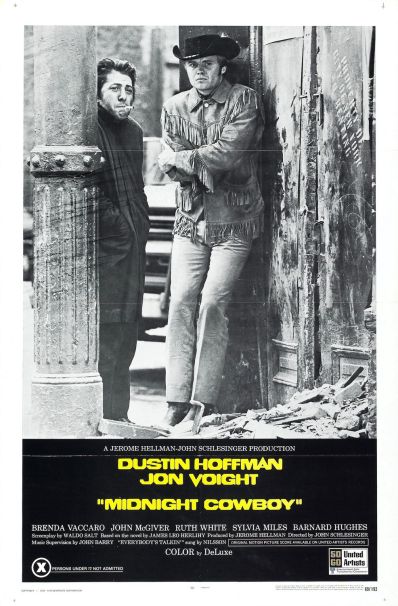 Rating- A / Even though it seems fairly tame by today’s standards in terms of violence, language, and sexual content, it’s easy to imagine Midnight Cowboy making waves in 1969. Both controversial and extremely daring for it’s time, the film, based on the novel of the same title by Leo James Herlihy, deals with hot-button issues such as prostitution, rape, homosexuality, and childhood sexual abuse. And it transcends the constraints of time and setting to tell an incredible story of innocence lost and outcasts eking out a hardscrabble urban existence that is both archetypal and vitally original.

Joe Buck (Jon Voight) is a somewhat dim-witted young man who is both heartbreakingly naive and overly confident of his effect on women. The victim of a tragic past, Joe decides to escape from his small-town Texas existence to move to New York and start over as a greatly desired and sexed-up gigolo. Hell, those hoity-toity High Society women would be all over a stud like him! His time in New York City soon turns sour, however, when he is tricked out of his money by a small-time con artist named Enrico “Ratso” Rizzo (Dustin Hoffman) and ends up penniless and alone, eventually prostituting himself in desperation to a young gay student (Bob Balaban) who somehow fails to pay him.

In an odd turn of events, Joe Buck moves in with Ratso in a condemned tenement and truly begins his life in New York not as a red-hot stud, but as a struggling and desperately poor outcast. Ratso steals the essentials and although the two men are initially at odds, but they eventually form an unshakable bond as the become two of New York City’s multitude of forgotten homeless. As the temperature plummets. Ratso’s Tuberculosis is exacerbated further, forcing Joe to make a desperate last-ditch effort to save his friend.

Interesting fact- this movie was the first X-rated film to win Best Picture at the Oscars. Today, it seems fairly tame, albeit deeply sad and emotionally harrowing, but back then it was a daring risk. What you’ve got here is a bleak but razor-sharp script, two characters who you come to care for despite their shortcomings, and, outstanding lead performances by Hoffman and Voight. Midnight Cowboy doesn’t stoop to cheap pathos or dime-store sentimentality, and it really encapsulates an era without feeling dated to young people who watch it now.

Instead of telling a typical narrative, the film incorporates some experimental moments that capture Joe’s stream-of-consciousness and all-encompassing desperate circumstances. Joe and Ratso make for a great team because of Joe’s stupid, glowing optimism and Ratso’s ugly cynicism and extreme lack of scruples. At one point, he even pickpockets a pregnant lady at the laundromat. When Joe comments on it, Ratso asserts that she doesn’t need it as much as they do. So goes a day in the life of these two polar opposites who manage to form a close bond despite their glaring differences. Joe Buck provides the scruples and the dim but abiding hope that things won’t be as shit tomorrow as they are today and the naively handsome good looks of the duo while Ratso keeps them alive with his cons and thefts. “Call me Enrico,” he says time and again. But who watches this film knows him as anything but “Ratso?” And who can forget his sleazy, nervy verbosity?

An emotional powerhouse that displays great acting performances all around,  Midnight Cowboy is a true original. Showing a glint of humanity in a the seedy underbelly of urban decay and prostitution, the film will break your heart and make you believe in great movies, in a world where most films are only made to make a quick dime.