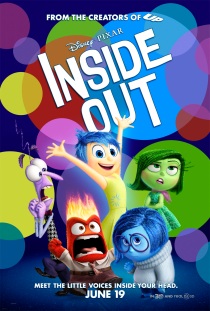 In a weird way, the premise of “Inside Out” is kind of unnerving. Beings inside your mind that click on the control panel to trigger your emotions? Whatever happened to good old free will? It’s kind of a psychological dystopia for tweens (though in a universe where my emotions were living creatures who controlled most aspects of myself, they’d probably be doing a better job than I’m doing now- how’s that for unnerving?)

Take away the disturbing social and psychological implications of this deconstruction of free will (!), and you’ve got a typically delightful, touching Pixar film. The basic plot centers around Riley (voiced by Kaitlyn Dias,) an eleven-year-old daughter of supportive, hockey-crazy parents (Diane Lane and Kyle MacLachlan) who is going through some tough life changes.

Her dad is having ever-present but obliquely mentioned financial problems, and her parents move her from her much-loved home in Minnesota to a small, shabby San Francisco pad. Luckily (?), the celebrity-voiced personifications of Riley’s feelings are there to help. Joy (Amy Poehler) runs the show, and under her watchful eye everything is mostly fun and pleasant, though  when Sadness (Phyllis Smith) interferes Riley’s mood transitions, predictably, from sunny to gloomy.

Anger (Lewis Black) fumes and rages while flames literally leap from his crimson head while Fear (Bill Hader) timidly and neurotically weighs the possible risk in any given situation. Disgust (Mindy Kaling) is kind of the queen bee of the group, adding a dose of much-needed snark.

Riley’s feelings are kind of a dysfunctional little family held together by the same circumstances (i.e. they inhabit the same brain,) but Joy fails to recognize that melancholy can a valuable, even healthy part of the spectrum that makes up the self until she and Sadness are inadvertently cast into the outskirts of the mind and Riley suffers a kind of an emotional shut-down. 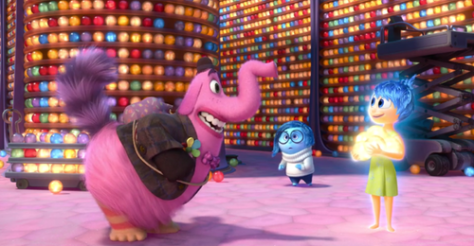 Tender and funny, “Inside Out” didn’t hit me in the feels as much as “Up,” an earlier effort and a personal favorite of mine, but it is an enjoyably creative adventure through an eleven-year-old girl’s mind. If the visuals of the dreamscape that Riley’s emotions inhabit was half as fun to create as they were to watch, then they must not have felt much like work at all as much as a veritable artist’s playground.

Aesthetically, Pixar studios has done it again. “Inside Out” looks gorgeous, both within Riley’s mind and out on the streets, school, and hockey rink she inhabits. “Inside Out”‘s success both visually and in terms of storytelling and pathos prove that filmmaker Pete Docter’s mastery of the craft in “Up” was not a fluke. There’s a lot of psychological jokes that most kids (and maybe certain adults) won’t get but there’s a distinct lack of the thinly veiled sexual humor that Dreamworks flaunts like a Harvard degree.

“Inside Out” has a pensive, melancholic quality that captures the insecurity and fragile uncertainty of adolescence which might go right over little kids’ heads, but they’ll be sure to enjoy the bright visuals and buoyant humor. Parents are likely to empathize with Riley’s parents’ financial and familial struggles without their woes overwhelming the picture.

A few parts of the film seem to drag along a little longer than they should, such as the abstraction sequence, but overall “Inside Out”is an outstanding film the young at heart or those who remember being young, when setbacks felt like crushing failures that seemed like they couldn’t be assuaged or mended with time, and life was made up by the highest of highs and the lowest of lows. This juxtaposition of jubilation and misery, through a child’s innocent eyes, is what makes “Inside Out” a truly singular experience. 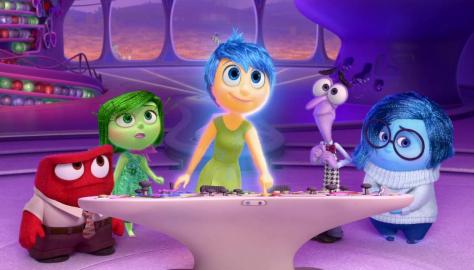