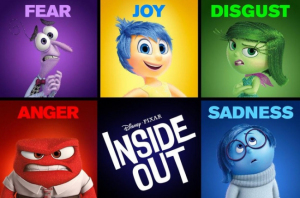 1.) Pick five films to represent the five emotions in Inside Out. The criteria for choosing these films is listed below. I would be willing to allow a tie, if you couldn’t decide between two films to best represent one of the emotions.
2.) Write out five paragraphs, (one for each film) talking about the movies and why you chose them.
3.) Post them on your blog (or Tumblr or whatever).
4.) Send me the link by posting it here in the comments.

What I’m looking for are five movies that make YOU feel a certain emotion. Here’s what to look for;

JOY: First of all, you want to pick a movie that makes you happy. The kind of movie that you put on whenever you’re in a bad mood that never fails to lighten your spirits. It can be a family film, a romance, a comedy – as long as there’s a smile on your face by the end credits, it should be fair game.

SADNESS: Now for the movie that made you cry the most. From Bambi to Titanic, there are plenty of tear-jerker movies out there. These are movies where you gravitate towards the main characters and really don’t want to see anything bad happen to them. Maybe a character dies, maybe the guy doesn’t get the girl, but your eyes should be pretty watery by the film’s end.

FEAR:  This is the movie that gave you the most nightmares. Pretty self explanatory. There are plenty of classic horror movies to choose from, but it doesn’t have to be an out-and-out horror film. If the movie’s about a more subtle kind of fear, or if the movie just has a creepy atmosphere, that should work. Whether blunt or subtle, this is the movie that scares the **** out of you.

ANGER: This is a movie that you flat out hated. Not a movie that was dull or boring, but a movie that just fills you up with rage just thinking about it. Maybe it’s a movie made by a certain director that had so much potential, maybe it’s an adaptation or a sequel that just didn’t do the original justice. It could also be a movie where your anger isn’t directed at the movie, but at the characters. Ever wanted to scream at movie characters for making such incredibly stupid decisions?

DISGUST: This last one is a bit tricky, I’ll let you interpret it the way you want. It could be a horror film with a lot of really awful imagery that you don’t want to look at, it could be a comedy with a bunch of gross-out humor that you can barely listen to. It could even be a movie that you like, but your disgust comes towards the basic premise in a grander sense, like being disgusted by what you see in 12 Years A Slave or Schindler’s List. Either way, this film should make you cringe.

I think “Billy Elliot” is one of the most beautiful films ever made. Do the Brits know how to do movies or what?! The emotions can be raw at times, but the payoff is uplifting and satisfying. The ending will make your heart catch in your throat with emotion and leave you gloriously happy at the same time.

Whoa boy. This movie, man. When the ‘protagonist’ (loosely speaking) of a film kicks his own dog to death within the first five minutes, you know you’re embarking on for a dark, grim journey. Alcoholic and ticking time bomb Joseph (Peter Mullan) forms an unlikely and tremulous bond with an abused woman (Olivia Colman) and begrudgingly lets her stay in his house. Who saved whom? Misery ensues. A nice little British realism flick to slit your wrists to, courtesy of Paddy Considine.

I watched this movie when I was about twelve, and it scared the shit out of me. Because of this scene (pictured above) I had to peek behind the shower curtain before I peed for years. Guess what? It still scares me to this day. Even the eerie music that plays while they’re driving at the very beginning sends chills down my spine. I’ve never watched a movie since that scared me like this one did.

Believe me, this screenshot makes the experience of watching “Bubble” look more interesting than it is. Prepare to be bored silly as a painfully dull murder occurs, punctuated by various scenes of three uninteresting characters eating McDonald’s and talking about, you guessed it, just plain uninteresting subjects. Like Michael Haneke, this movie downright denies you the pleasure of making you care about its characters, but unlike Haneke, it lacks the stylistic verve and unnerving social commentary to pull it off. Worst of all, this turd was hailed by the critics as a masterpiece.

Don’t get me wrong, this is a solid movie, but although it didn’t psychologically scar me like certain films (for instance, “The Living and the Dead“) it is unrelentingly gruesome and grim. While “The Living and the Dead” disturbed me due to it’s extremely bleak portrayal of mental illness, “Martyrs” is exponentially bloodier and more brutal. A character is flayed alive, women are beaten senseless and tortured sadistically, all for the peace of mind of decadently rich douchebags (you’ll see what I mean if you watch the movie.) The nearly non-stop barrage of violence is stomach-turning and the presentation nihilistic.

3 thoughts on “The Film Emotion Blogathon”