“Scum” is an important and controversial example of harsh British realism charting incarcerated teen Carlin (Ray Winstone)’s transformation from wayward kid to brutal thug with the help of a “One Flew Over the Cuckoo’s Nest” style correctional institution. Only this place makes the hospital ruled under the iron fist of Nurse Ratched in the classic film (a mental hospital, not a Borstal, as portrayed here) look like a trip to Disneyland paired with a ride in the spinning teacups.

The movie might as well be called “You Wouldn’t Want to be a Kid in 70’s Borstal.” It’s grimmer than grim. The facility is a horror show that includes sadistic guards with collective hard-ons for harsh discipline (i.e. abuse,) rape, despair, and suicide. The only thing worse than the “Lord of the Flies”-esque ‘Daddies’ that terrorize and sodomize the weaker children are the cruel, hypocritical, and astonishingly uncaring guards. One such ‘screw’ regards a boy of about thirteen getting gang-banged with a look of smug enjoyment on his face.

These guards, ironically, are ‘upstanding citizens’ in the eyes of the public. They go home, kiss their wives on the mouth, play with their kids and sleep easy, unaware or unconcerned that a massive crime against humanity has been  committed. Because who cares if the ‘scum’ get their human rights violated? But if the boys are scum, what does that make the men? These remorseless cogs in a system that spits out it’s incarcerated youth crueler and more disaffected than before. 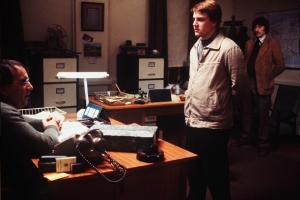 Alan Clarke directs “Scum,” and it’s a harrowing experience. No humor to speak of, few scenes of goodwill or humanity, no soundtrack sporting the latest tunes to remind us that we’re watching a movie… there’s only one scene that contains any warmth whatsoever. Resident  wiseass Archer (Mick Ford) reads a note from home to the illiterate Woods (John Fowler,) who is completely obsessed with the pet dog he left behind and her litter of new puppies. Over the moon, Woods begs Archer to read the note again, a lone relic from the outside world.

That’s it. That’s the extent of the sentiment. The psychological torture combined with the physical violence and cruelty make “Scum” a singularly harrowing experience. The lead performances are incendiary, the most impressive turn not coming from Winstone, but from Julian Firth, who plays the ill-fated Davis. Firth is simply outstanding, especially considering his youth and the emotionally painful rape scene and the resulting fallout the director subjects him to. He doesn’t break character once, and he and Toyne (Herbert Norville) are the emotional heart of an unremittingly bleak picture.

“Scum” isn’t a perfect film. It’s point (that a bleak and hopeless prison system is ultimately more destructive to Britain’s youth than just leaving them on the streets to do what they will,) seems to lack subtlety at times, especially in a scene where Archer shares a moment of philosophical discussion with a guard and in the process pretty much provides him with the entire message it’s director is trying to push. But it gets points for being fearless in it’s portrayal of a broken system, gritty as Hell, and carefully researched by Clarke, who interviewed hundreds of guards and prisoners of Juvenile Detention Centers for this film.

In many ways, “Scum” is a historically important film, and it will definitely put your life in perspective for you when you’re filled with unwanted ennui and angst. Yeah, the kids in this film screwed up, but they’re paying for it tenfold in a system that will either destroy them or release them as half the people they were before, hard and lifeless imitations of people unleashed on a world that suddenly seems much crueler and devoid of hope than it did before they went in. The director sometimes flaunts an obvious political agenda, but also has a natural ability with his actors and behind the camera. It’s a dark, dark journey, but also a valuable one.