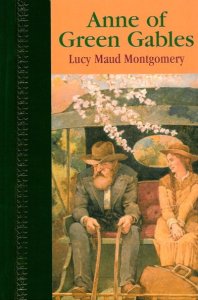 Admittedly, I am not supposed to be the target audience for Anne of Green Gables. In fact, I would not have reread it at the age of twenty had my mother not bought the used boxed collection online to read to my sister. I figured, heck, why not; if only for nostalgia’s sake? If I could describe Anne… in one word, it would be ‘quaint’ which is a very good thing, in this case. It helps the reader to remember a simpler, more innocent time through the eyes of a spirited, naïve child.

Marilla and Matthew Cuthburt are grown-up, unmarried siblings living together in the small, gossipy town of Bolingbroke, Novia Scotia who decide to adopt a young boy from an orphan asylum to help them carry out household and farm tasks on their piece of land. Imagine their surprise when Matthew goes to the train station to pick up his adoptive son and comes back instead with a freckly, fiery-haired eleven-year-old girl!

This is Anne Shirley,  who talks constantly and always has her head floating up in the clouds with pleasant daydreams. Anne ingratiates herself in with the Cuthberts and eventually bonds to some extent with the suspicious townspeople, despite the fact that her peppery demeanor allows little room for forgiveness. She can hold grudges like a Sicilian, especially against a certain schoolmate named Gilbert Blythe, who might be Anne’s first crush (not that she’d ever admit it,) and the Cuthbert’s busybody neighbor Miss Rachel Lynde.

The novel, the first a series following the titular ginger, follows the often humorous series of mishaps and ‘scrapes’ Anne befalls on the road to growing up, and her eventual maturation and coming of age. There’s no great drama until near the end, where one lead character dies and a serious disability threatens to limit another’s day-to-day life.

The thing is, I found Anne a bit annoying at the beginning of the book, but I found myself missing the old, chatterbox Anne when she became more quiet and serious, which was quite a strange experience for me. Anne is overall an ideal role model for girls, spunky while still retaining her femininity and promoting a love of reading and childhood flights of fancy.

The relationships in Anne of Green Gables are quite sweet and innocent and although the slow pace and florid vocabulary won’t snatch up reluctant readers, young girls and girls at heart who already love books and reading will enjoy this this trip down memory lane, or will happily devour the series for the first time. The jury is out on whether a boy would pick it up.

Overall,  Anne of Green Gables is not too outdated and is often very funny in a gently wry way (you can tell that Lucy Maud Montgomery was a sophisticated lady with quite a sense of humor.) However, it might be hard to push on new readers in our electronics-obsessed world, as it is low on epic conflict or contemporary-minded shtick.

Favorite Character- Matthew was such a sweet old man. He was terrified of girls and women as a lifelong bachelor lacking in sex appeal but really doted on his adopted daughter in a pure, innocent way. Perhaps he was a little bit on the simple  side but he was a good father to Anne and a hard worker.