“An American Werewolf in London” is a overlooked classic of horror that provides laughs and scares and remains fresh upon repeat viewings. Sporting amazing make-up effects by Rick Baker, it also contains a werewolf transformation scene which has to this day not been topped.

Goofball American youths Jack and David (Griffin Dunne & David Naughton) are backpacking in England when they are attacked by a werewolf, leaving Jack dead and David barely injured, but infected with lycanthropy that takes hold of him every full moon.

After a stay in a hospital whilst having his wounds treated, David is taken to the flat of a pretty nurse (Jenny Agutter) who has taken a shine to him (if this is starting to sound a little like a “Playboy” pubescent fantasy, read on.)

In between getting hot ‘n heavy with his new girlfriend, David is visited by his dead friend Jack (!) who’s still a live wire even while returning from the grave in a state of decomposition. Jack, always the optimist, arrives to warn David of his impending doom.

Meanwhile, David suspects he is going crazy and hospital doc Dr. Hirsch (John Woodvine) looks into the circumstances that surround the attack. The dialogue in this is great, and fairly crackles with life and wit.

With all these strengths, isn’t it a shame that they didn’t pick a better actor to play the lead. Naughton, who was discovered by director John Landis doing a Coke commercial, doesn’t exactly impress playing David, the titular werewolf of the title.

It’s hard to buy his performance, which awkwardly melds grief, guilt, and frustration. Meanwhile, Griffin Dunne (Jack) and Jenny Agutter (Nurse Price) provide strong support. Nurse’s development is questionable, though, as is her decision to pair herself up with a confused and seemingly insane man.

However, “An American Werewolf…” is strong and funny comedy-horror. The soundtrack, which employs only moon-themed songs, is an asset, as is the script, originally written by John Landis when he was only nineteen years old. Does my screenwriting movie-loving nerdy little heart proud. Watch it. 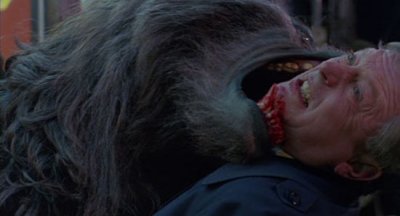