The lights in the theater go out. The film begins, and the audience falls silent. But this is no ordinary popcorn movie. This is a down-and-dirty horror movie, designed to disgust, and hopefully, to terrify you. Why are you here? No, really, why are you here? Huh? Sicko?! Okay, now that I’ve gotten your attention and been a confrontational prick, let’s get to the nitty-gritty of so-called ‘disturbing films.’ Disturbing films vary a lot in content and quality. If you think the only films that are disturbing are the ones of the torture porn variety, like “Hostel 3” (shown above,) you’re wrong.

People are perturbed and generally freaked out by my interest in ‘disturbing’ movies. You have anxiety, they say. How can you do this to yourself? Are you really so desensitized. Okay, let’s talk about that word, desensitized, generally applied to serial killers and mass shooters who have done something terrible and want to blame someone else for the horrible nature of their act. The Doom games maybe, or Rammstein. Or how about… TOM SIX?

This essay comes just in time for the release of the 1st image of “The Human Centipede III (Final Sequence)” Now I’m not arguing for the questionable quality of this franchise. I saw the second one. There actually were some good things. Laurence R. Harvey (pictured above on the left, in the third one, and below with the remains of his ‘mother,’ in the second) gave a fantastic performance. The development of the character ‘Martin’ was quite interesting, although he spent most of the movie hitting people with crowbars and doing his thang. 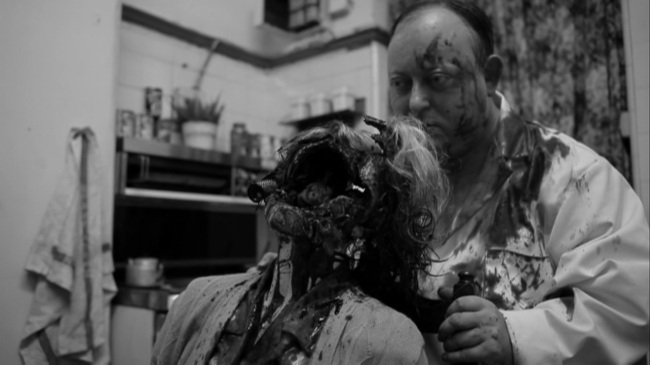 But most of that was overshadowed by the neverending torrent of torture and the, uh… projectile defecation. Simply put, I understand why people would like this movie. It has it’s… charms -o- But is it a quality movie on an artistic level? No it’s not.

Here’s something funny- the first movie to really disturb me as a teenager was “The Living and the Dead,” the heartwarming story of how a mentally handicapped man abuses his mother to within an inch of her life. Confession- I’m a sucker for films about psychological degeneration, and I’m sensitive to disturbing films involving mental illness or disability. Thing is, you FEEL for this man. You go on his journey, and you see most of the movie from his demented point of view, which makes you sympathetic to his plight. That shocked me more than “The Human Centipede II” (which barely fazed me) could ever do.

This movie has everything-

I guess what I’m getting at is #1 can ‘disturbing’ movies also be quality films, and #2 should they ever be censored/banned? The answer to question #1 is yes. Consider “The War Zone,” the 1999 dictatorial debut of Tim Roth. As a powerful tale of sexual abuse within a dysfunctional family, it gets under the skin and stays there. This movie has content that will turn your stomach. But is it art? And I ask, does the material make it not so? These things do happen, and many films aspire for more than entertainment. Could it be triggering for victims of incest? Of course. But these unfortunate folks have the RESOURCES to LOOK UP it and films like this one and avoid it, if need be. Remember, not every movie, was made for everyone. I know my father is a good and decent man, but that doesn’t stop “The War Zone” from being frickin’ disturbing for me.

I thought some of you might like to read the essay Why We Crave Horror Movies by Stephen King. It discussed movie violence as catharsis better than I could.

Here’s an interview with “The Human Centipede II (Full Sequence)” actor Laurence R. Harvey, discussing, among other things, violence in the media. Despite what you might pick up from his THC2 character, Mr. Harvey is very smart and articulate. Give it a watch!

What did you think of this article. What was awesome? What could be improved? Thanks for reading!